Departure into Frenzy Into Folly

Posted on October 6, 2012 by photographybykeena

This summer I took a little departure from the commercial work and focused on a new venture. Co-curation! Michael Berube and I worked on an exhibition entitled “Frenzy Into Folly” which was featured in the Church of St Paul The Apostle in Midtown New York. The church, having began construction in 1876, has had a long standing tradition of supporting artists. This coupled with the challenge of showing and curating a show that preserves the architectural and human integrity of the space made this departure a fantastic experience. Not only did I co-curate but I featured a piece in the exhibit which references media frenzy and then proceeds to compare the similarities between Catholicism and Islam. Here are a couple of press videos that were made (extra special thanks to Joey Kilrain who shot and edited them) along with an image of the canvas I presented in Frenzy Into Folly: 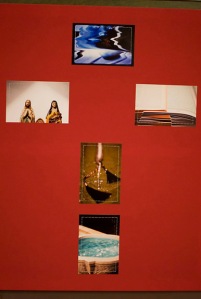 Image of canvas by Keena Gonzalez which was featured in the exhibition “Frenzy Into Folly” at the Church of St Paul The Apostle.